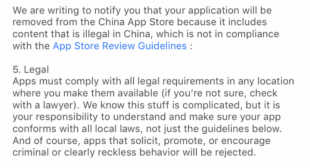 Once again the China shows its power to the mobile app world and the rest of the world by taking down all VPN (Virtual Private Network Services) in the country. On the command of the Chinese government, Apple has removed all the VPN apps from the App Store in China.

The ExpressVPN is among the service providing app that faces the wrath of the joint action by the China and the Apple first. The c