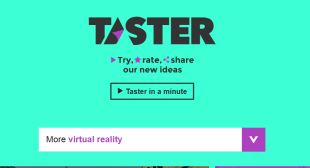 Worldwide news broadcaster now has taken a step to integrate the contemporary technology into the media system. BBC just released an app named Taster VR with the aim to transform the news delivering channel with the help of Virtual Reality. The media giant just introduced its new app for delivering the content to the viewers virtually. Till now we have experienced the VR in movies, videos, and gam